High-speed fleeing from strange creatures, leaving the scene of a hit-and-run and modifying your car to run on wine instead of petrol…

These are just a few of the weird and wonderful things that happen in our favourite Netflix shows.

You won’t be surprised to know that these events can seriously affect insurance premiums, but can you estimate how much it would actually cost to insure them in real life?

Thanks to our team of experts at Fleetcover, it doesn’t need to be guesswork.

They got together and gave each vehicle a risk factor rating out of five (five being the highest risk and one the lowest). They used these scores to determine the eye-watering estimates of annual premiums for each vehicle.

Take a look at their findings below; you might be surprised by the results! 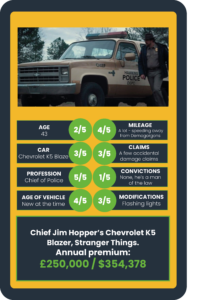 This expensive premium is largely due to Jim’s profession as Chief of Police – he’s been involved in all sorts of dangerous situations, including speeding away from Demogorgons and lots of accidental damage! The flashing lights ‘mod’ also pushes up the cost. 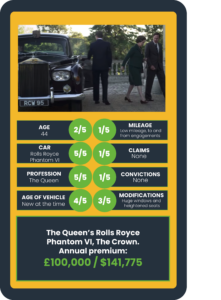 This Rolls Royce Phantom VI is valued at £2m, increasing the premium hugely as it is very attractive to thieves, although palace security should keep out the riff-raff! The Queen is probably the most famous person in the world, so that would definitely increase the premium. There are a couple of modifications too – huge windows (to wave from) and specialised seats are expensive to replace.

Like his mum’s Roller, Charles’ choice of car is rated 5/5 risk because it’s such a high-end model, and being heir to the throne ups the risk massively. Strange but true – this car is modified to run on WINE rather than petrol (yes, really), which brings a whole new meaning to drink-driving! 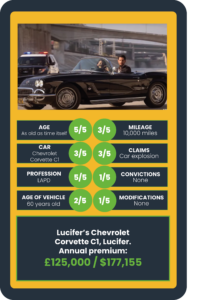 Lucifer, the little devil, is as old as time itself, so it’s no wonder that as a diabolic driver he comes with high risk. He also works for the LAPD, owns a nightclub and is literally the ruler of Hell, so he’s bound to get a hot rating! The car exploding in season 3 doesn’t help to keep his premium low. 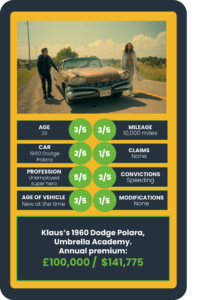 Superhero Klaus never plays by the rules and is no stranger to speeding, significantly increasing his risk factor. His exciting profession unfortunately comes with the constant threat of impending doom, as we see in the show, which gives him a whopping 5/5 risk. 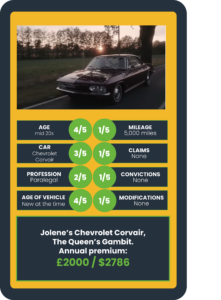 Jolene, friend of main character Beth, is in her mid-20s, which makes her quite a high risk as she is still young, with little driving experience. Who can blame her for splashing her hard-earned paralegal cash on a new motor, but this increases the risk to a high 4 out of 5. Given her squeaky-clean profession, let’s assume she abides by the law, which helps bring down her premium. 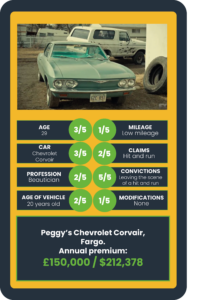 Poor Peggy. You can’t flee the scene of an accident and expect to get away with it, so she instantly gets a 5/5 for previous claims! Thankfully, her low-risk profession, combined with low mileage, helps to counteract her poor driving record, which gives her a score of 2 and a 1 out of five respectively.